“Steve Thorne is an independent filmmaker and weekend warrior pilot who decided to share his learning experiences as a private pilot with the world.  The idea for Flight Chops was born over dinner with some friends, with a logo doodled onto a napkin.  Since then, the show has almost 58,000 subscribers and over 5 and a half million views on YouTube. So I have to admit that when I cold called Steve to ask if he would give Infinite Flight a try and chat about his experience on FlightCast, I was a little surprised that he said yes!  Join Steve, Mark, and I as we learn the story behind this great pilot tale.” 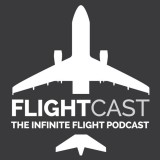 Jason is the host of FlightCast, Infinite Flight ATC Moderator, and avid aviation enthusiast. He works as a web developer at his company, Linkhouse Media, and lives on the beautiful shores of Georgian Bay in Parry Sound, Ontario, Canada.