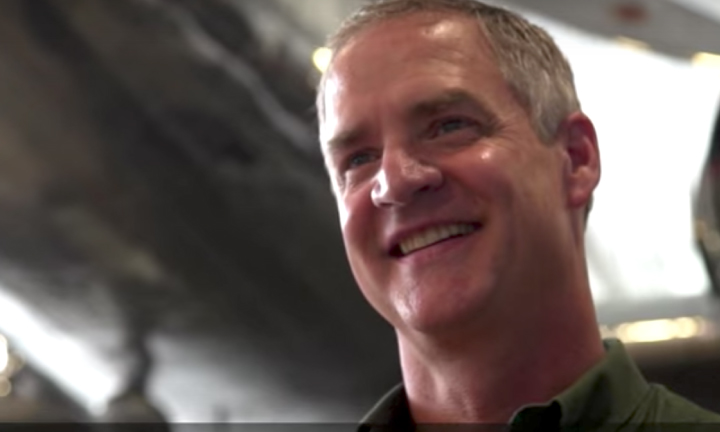 A little while back, we had the pleasure of meeting up with Paul to explore the Delta Flight Museum 737-200 Sim in Atlanta, GA.  You can catch that episode here:

We caught up with Paul to pick his brain about Aviation, and here’s what he had to say:

What led you to pursue commercial aviation?

Before flying professionally, I was a farmer from Iowa. When I was a young lad, the nearby Air National Guard unit flew F-100 Super Sabres on low level routes right over us out in the fields. They were so loud and fast it made the hair stand up on the back of your neck! So, at an early age I started daydreaming and working towards flying for a living, first in the USAF, then for a major passenger airline. I was never tempted to stray from the path, that’s 35 years and 20,000 hours to date.

Who has been a mentor to you and why?

I consider everyone I have ever flown with a mentor. You can pick up a lot by watching and listening. Having said that, it is important for me to set a good example regarding compliance with company policy and procedures; because I know others are watching me.

What was a pivotal moment for you in your career?

My pivotal moment happened last year when I realized I would never be as awesome or as cool as Brock Hodgkinson. Seriously, my path has been on the straight and narrow without many roller-coaster moments. Getting hired by a major airline is no easy task; that was a big deal for my whole family.

What is a goal that you’re working toward now?

It may sound like a strange thing to work on, but really, anyone can fly my airplane safely from point A to B with the right training. So, when I go to work I try to spread smiles, lightness, joy, confidence and calmness. Lots of good karma flows from that. It is a challenge for me because my default is being all-business and pretty task-oriented. I am always in the books reviewing and keeping up. Knowing more than everyone around me is my secondary, never-ending, goal.

What has surprised you most about the airline industry?

What surprised me most about airline flying is the amazing amount of money the industry could lose in a couple of decades of cutthroat competition. 60,000+ people work their hearts out for a year and the balance sheet would still be in the red. All that work and moving backward as a company. My company going bankrupt was humbling to say the least. We fought hard though. Now, we lead the industry on most operational metrics and we all got hefty profit sharing checks the last couple of years.

Looking back, what do you wish you knew early on?

I wish I had developed the skill of seeing around corners earlier. I now anticipate events. I show up for work early. I plan thoroughly. I develop contingency plans by envisioning the whole flight from gate to gate and then getting to the layover hotel, rest, meals, etc. No one can see the future, but I can get pretty close, and that has immense value in aviation. You know, that key fob will unlock your car door from 30 feet away, you don’t have to be standing there in the wind and cold with your hands full of groceries fumbling in your pocket for it. That’s sort of what I’m talking about.

What’s one piece of advice that has served you well?

Good segue, you planned that didn’t you? “Don’t get behind the airplane.”

Can you tell the FlightChops Community about a time you screwed up so that others can learn from your mistake?

Sure, I have no shortage there. This is from my last flight: I missed an altitude level off, at a fix, from my enroute descent by 300 feet. I could have made it but it would have been rough on the passengers. And, it was close enough so as not to be noticed by ATC. I could have blamed the winds or the VNAV computer because with 4000’ or about a minute to go I was right on the path. It retrospect, it was on me. I should have started down sooner back at FL370 or input an airspeed pad so I could accelerate and get down as needed.

Always be honest and look for the root causes folks, not just the obvious scapegoats.

Check out the latest video featuring Paul!  Hint – it will give you all the feels 🙂