All about the Harv’s Air Inverted Flight Chops Experience (+Photos!) 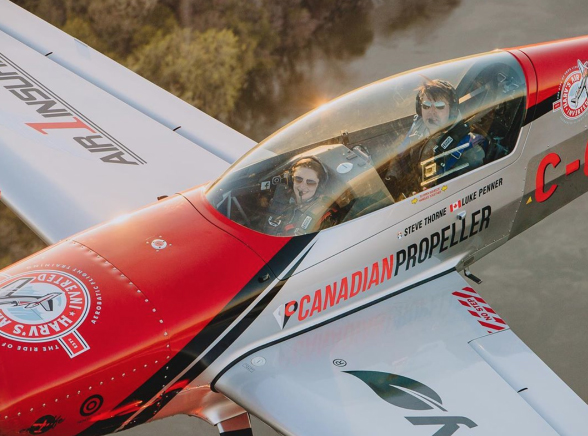 The awesome private pilot (and ball of energy) that is Hannah Neill won the Harv’s Air Inverted Flight Chops Experience!

Here’s what went down in mid-May 2019 in Winnipeg, Manitoba, Canada.

My flight training in 172’s and Archers taught me to maximize the plane’s performance and avoid placing excessive stress on the airframe and engine. In the Extra 300L though, it will over stress YOU first. Truly a remarkable plane, and I loved seeing what it could do!? • #flywithaopa #harvsairinverted #aviatrix #aviatrixlife

The “FC Experience” concept is one that we’ve done a few times, each one getting increasingly epic. In a nutshell: I’ve lived some uniquely awesome flying experience that I shared in a Flight Chops episode, then a lucky winner gets to relive it… and be in a future episode too.

I don’t know of anyone else doing these sorts of giveaways, and I love so much being able to give these experiences away to viewers.

Back when I started the channel, I was hoping to stay behind the camera at all times — but a good friend wisely told me otherwise. ‘You’ve got to put the “You” in “Youtube”’, he said, which is how my face ended up in the episodes.

Five years later we’ve brought this concept to the next level, where we are literally taking the viewers out of the audience and putting them in front of the camera — putting the actual YOU in YouTube — having you live out these incredible experiences.

These past few days in Winnipeg were completely jam-packed with one awesome thing after another.

Luke Penner from Harv’s Air Inverted was the mastermind behind it all, and provided tons of training for both Dave Carrick (who you’ve met in many warbird episodes at CH2A) and I.

What a blast it’s been to fly with Steve from @flightchops in the Extra. Some super fun content is coming soon! • • • • • #flightchops #travelmanitoba #extra300 #harvsair #harvsairschool #aerobatics

Dave’s focus was to solo in the Extra300, while mine was do the back seat (PIC) check out and also get precision aerobatic training to fly the “Sportsman Known Sequence” (and avoid getting the dreaded ‘hard zero’ performance score, which is surprisingly easy to do). We were lucky enough to get the local tourism board, Travel Manitoba, to join in on the fun.  They graciously provided accommodations, meals and loads of activities for us to do while in Winnipeg — stay tuned for a future episode where we hilariously live out the best Ferris Bueller day.

The weather forecast was shaping up to only provide good flying conditions on Day 1 out of 4, so we crammed roughly 80% of what we wanted to do into that first day. Exhausted by that effort, we didn’t slow down at all when the weather turned out to be great for the rest of our stay.  I figure we got about 3 to 4 episodes out of that trip.

Meanwhile, Hannah was with us the entire time, enjoying every second of it.  The icing on the cake was the aerobatics flight she did with Luke at sunset. She also loved the aerial photography flight done by photographers Jake + Jess from KampPhotography.com. Hannah had not yet experienced a formation flight in tight formation quite like that – these photos pretty much sum it up.

This past Thursday we got to do a super rad shoot. An awesome contest sponsored by @flightchops @harvsairinverted and @travelmanitoba flew @hannah.neill up from Oregon to be part of the filming of a Flight Chops episode, and fly in the Extra 300. We have had the chance to photograph Luke and the extra before, and decided what an amazing opportunity to get some shots over @theforkswinnipeg and downtown Winnipeg. Such an awesome experience! Huge thanks to @chris_unrau for providing and piloting the photo ship, always awesome to fly with you! . . #kampphotography #harvsairinverted #flightschops #exploremb #travelmanitoba #travel #aviation #flight #flying #winnipeg #manitoba #sunset #avgeek #canada #extra300

Photo by @kampphotography from the most incredible day of my life. I never knew I could love aviation so much. Luke at @harvsairinverted blew me away! And thank you @flightchops for giving me this experience. More photos to come!???? #flywithaopa #travelmanitoba #harvsairinverted #avi_things

All in all, a fantastic few days, and the overall mission was a great success!

Stay tuned for the next FC Experience — which episode would you like to live out?

Airplanes! and Building stuff and Flying and hamburgers with a contest and people at a museum and…

Announcing the Winner of the Epic Home Flight Simulator!