Here is the latest that’s going on over at FC Headquarters…  Plus, Airventure updates are below!!

WHAT’S UP WITH ALL THE LATEST EPISODES

What a whirlwind of editing and publishing it’s been for the past few months — we’ve been publishing 4 episodes per month since May! Slowly chipping away at our enormous backlog of content… but the priority for me has been to get the last of the #Osh16 content out to you guys before we head back out to AirVenture this summer!

FYI – Because I’ll be travelling, we’re going back to publishing every 2nd Friday during July and potentially August too. Up next are Parts 1 and 2 of the “Cessnas to Osh” MASS ARRIVAL, where I will walk you through the breakdown of how a fleet of ~100 mismatched speed planes is orchestrated (the Cessna fleet has wildly varying speed ranges which makes this one unique compared to let’s say the Mooney or Bonanza mass arrivals).  In contrast, I’ve also covered how the public Fisk Arrivals work (that episode was published previously and you can view it here.)

Some viewers have mentioned they’ve had a hard time keeping up with all the latest episodes – so here they are, in case you may have missed some:

Formation Flying – A few days ago, I earned my Solo Formation Sign Off in the Chipmunk! The 1st formation debrief video is the beginning of that experience. And the P-51 Mustangs are not to be missed – so much to learn from these experienced pilots. 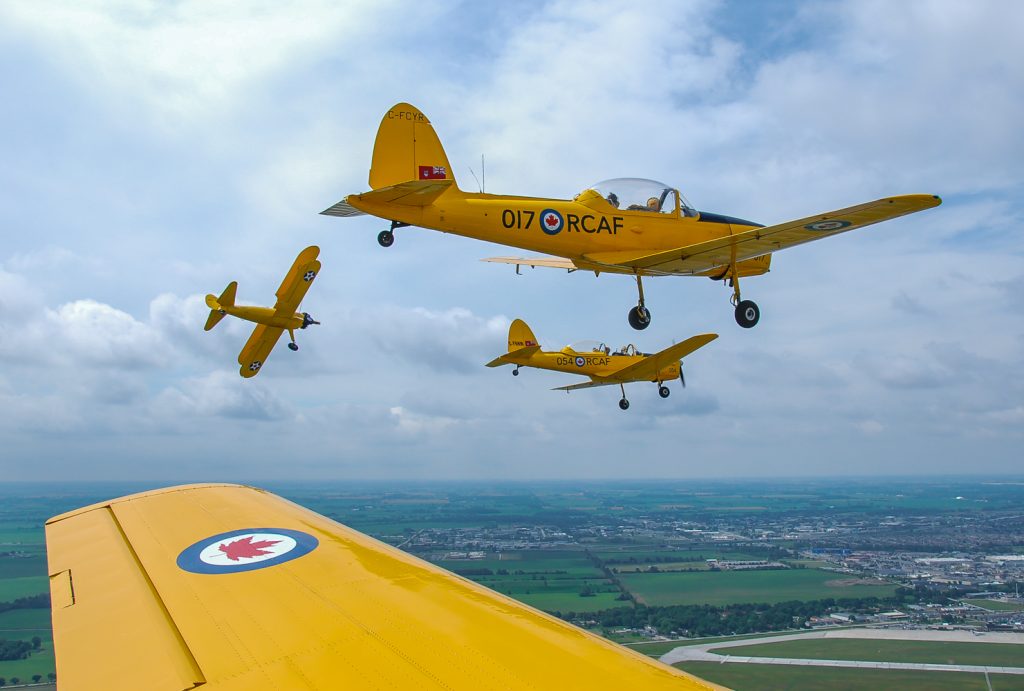 Wilderness Survival Training in BC – see a bunch of guys learning how to survive a night in the cold, wet wilderness with only what’s available in a typical airplane kit (not very successfully) – while in Part 2 we explore how not all forced landings are due to engine failure:

Jets and Aerobatics – this is the kind of stuff that longtime viewers bust my balls for. I admit it – it’s impossibly awesome and I can’t turn down these opportunities… even if they keep delaying my instrument rating 😉

All About CubCrafters – I am not being paid to say this, but CubCrafter planes are awesome. I’ve somehow been lucky enough to fly three of them in one day. Plus, this series makes me happy because I got to bring my wife Jill into this crazy passion of mine:

WHAT’S UP WITH THE CONTEST

In JUNE 2017, we teamed up with The Finer Points and Steveo1Kinevo to give away an aircraft-owner spot on an upcoming TFP Adventure Flying trip in the San Juan Islands, in the Pacific Northwest. Because this prize is so unique and rare, we decided to extend the contest by a few more days to give everyone one last chance to participate. (Non-aircraft-owners can participate too! Should you be selected as the winner you’ll have the option to pay the difference to rent an aircraft for the trip).

If you haven’t yet, play the San Juan Islands Contest Now! This contest will close at midnight PST on Sunday July 9th, and the Winner will be contacted on Monday the 10th.

Here is the scoop on #Osh17, running from July 24 to 30th. I’ll be there and looking forward to meeting as many of you as possible in person — it’s my favorite part of the event!

Next up, I’ll be in the Seattle/San Francisco area as of August 10th, and will be participating in TFP’s epic San Juan Islands Adventure Flying Trip. The focus will be on learning to fly over water and emergency preparedness, among other topics and talks that will be had (including one by special guest Steveo1Kinevo). I’m really looking forward to the chance to fly a CubCrafter and discovering this incredibly beautiful part of the world. Wanna join us?

Oh – and I just uploaded this short vid about the summer:

My new Airplane!? Taking Home the Latest STOL Aircraft on the Market!

1st Tailwheel Landings at Night + Emergency due to a Light Bulb!?